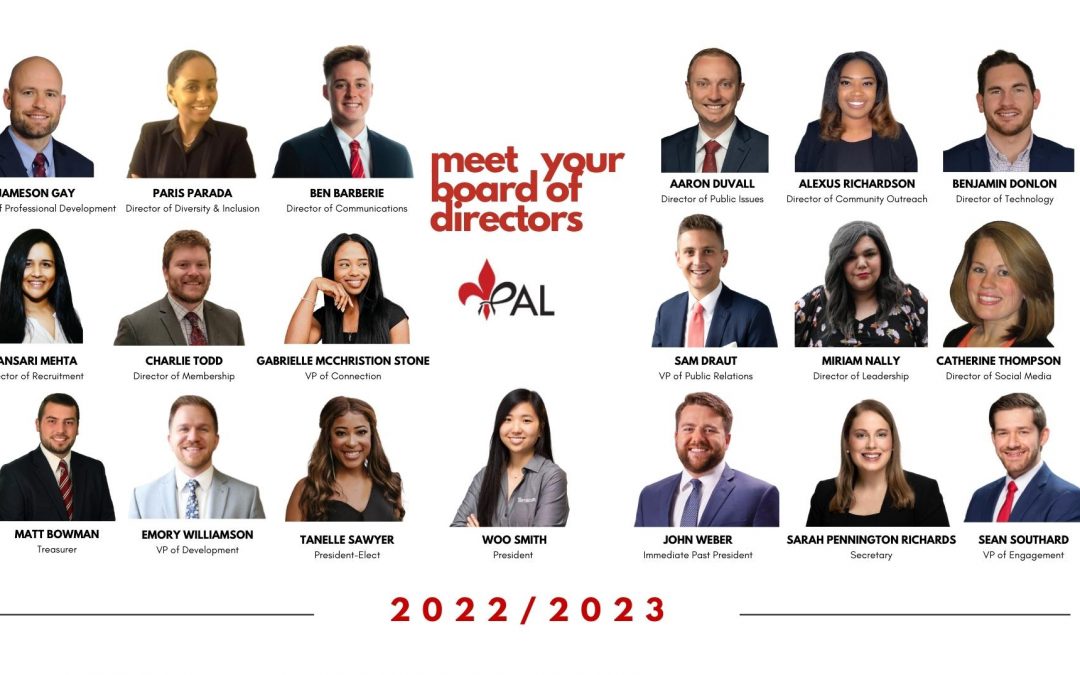 The board will be led by incoming President, Woo Smith, a Senior Associate at Terracon Consultants, Inc. The 2022-2023 Board term will begin July 1, 2022.

“The incoming board is filled with talented professionals devoted to seeing Louisville become a better city by attracting professional talent, developing leaders and creating a community focused on lifting everyone upward,” Smith said. “I’m excited to lead a board that’s representative of the skillful and accomplished young professionals in Louisville.” 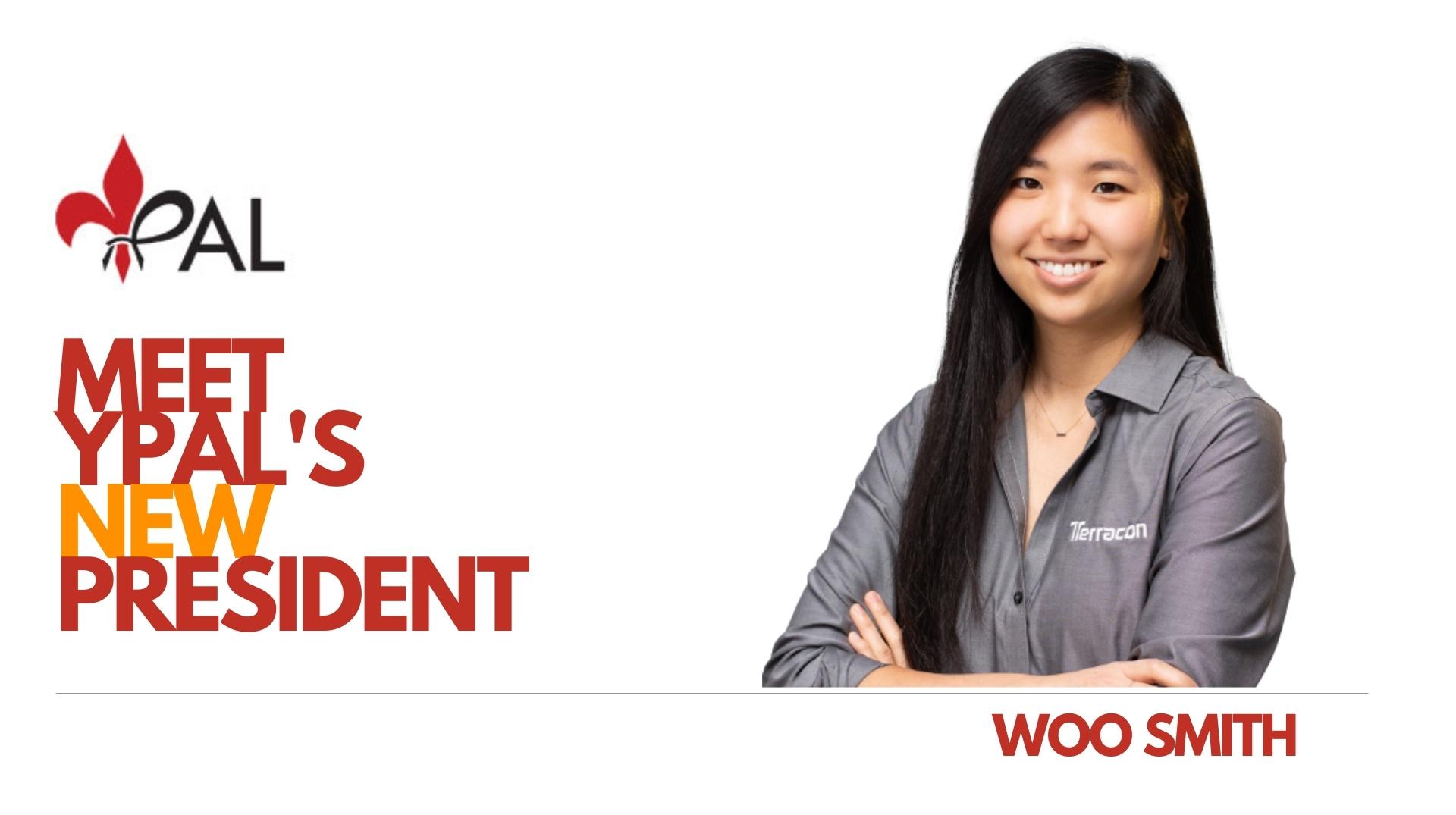 Woo Smith currently serves as YPAL President-Elect until she will take the reins as YPAL President on July 1, 2022. Smith is a Senior Associate and Regional Environmental Department Manager for Terracon’s Louisville and Lexington offices. Terracon is an environmental, construction/materials testing, facilities, and geotechnical engineering consulting firm with over 6,000 employees in 150 offices nationwide. Smith, who has spent nine years at Terracon, is an industry professional knowledgeable in environmental procedures utilized by numerous federal agencies and has overseen the development of hundreds of Phase I ESAs, NEPAs, Wetland, Biological, and Cultural Reports. In addition to helping manage a portfolio of national accounts, she oversees project execution, technical review, employee management, and quality control.

Smith first became involved with YPAL as an Ambassador in 2019, following her relocation to Louisville. In the fall of 2019, she graduated from YPAL’s Emerging Leaders Program, which is designed to address specific leadership development needs of young professionals as emerging leaders. Smith joined the YPAL Board of Directors for the 2020-2021 term, serving as Director of Leadership and leading the largest Emerging Leaders Program cohort in organization history.

Moving to Louisville in 2019 with her partner, Gary, who is a Louisville native, Smith quickly became connected with YPAL.

“I didn’t know anyone here except for my partner and his family,” Smith said. “I wanted to challenge myself and create my own circle and network of friends. My involvement with the organization grew organically from the first event I attended. From the get-go, YPAL was very warm and welcoming. But the organization had a much more significant impact on my life than I expected. While I’ve grown up in various cities throughout my life, Louisville was the first place where I felt like I was ‘home’ and I belonged. I believe that YPAL was instrumental in giving me that sense of belonging and purpose within this community.”

Smith was born in Seoul, South Korea and then lived in Mexico City, Mexico and Bogotá, Colombia, before immigrating to the United States with her mother and sister. She grew up in Miami, Florida where she attended middle school and high school and then moved to Atlanta, Georgia to attend Emory University. Following graduation, she worked in Atlanta and Chicago for Terracon before arriving in Louisville.

“There are measurable goals, in terms of expanding membership in education, hospitality, healthcare, architecture, construction and engineering, among other industries,” Smith said. “Then there are also intangible goals of improving the culture of YPAL by enhancing the sense of belonging, strengthening the way people feel about YPAL and creating a better organization as a whole.”

When Smith isn’t leading YPAL and excelling in her role at Terracon, she enjoys powerlifting. As a competitive powerlifter, Smith has won the United States Powerlifting Association (USPA) state championship for her weight class in Kentucky. She has competed in seven competitions thus far and hopes to break state records later this year. Smith lives with Gary and their two dogs in their St. Matthews home. As a family, they are proud supporters of the Special Olympics of Kentucky and sponsors of the West Louisville Chess Club.

In addition to YPAL, Smith strives to have a positive impact on her community by serving on the Metro United Way Board, Membership Chair for the International Facility Management Association (IFMA) Board, Portland Museum Board of Trustees, Education Board for the National Association for Environmental Professionals, Secretary for Kentucky Wireless Association, an Architecture Construction Engineering (ACE) Mentor, Committee Chair for the South Wireless Summit, and an active member of the Emory Alumni Association. Smith has also served as Vice President and Board Member-at-Large for the Illinois Association of Environmental Professionals for five years, which provides programming, educational opportunities, and resources for environmental professionals.

Smith graduated from Emory University with a major in Political Science and Environmental Studies with a focus on Environmental Policy. In 2021, Smith was named as an honoree of the Louisville Business First 40 Under 40 Class and was commissioned as a Kentucky Colonel. She is currently enrolled in the University of Louisville College of Business Professional MBA Program and is a recent graduate of the Leadership Louisville Center’s Ignite Louisville Class of 2022.