What is Community Supported Agriculture or CSA for short? A CSA is a term commonly used to describe a farming agreement where consumers (sometimes called farm members, or shareholders) receive a weekly share of vegetables harvested during the growing season, with the budget costs split evenly among the members. The members share the risks and rewards with the farmers and develop a sense of responsibility for the stewardship of their farm.

Because CSA often involves local families directly in the decisions and work that it takes to grow the food they eat, it reestablishes the link between the consumer and the farm itself. This link also encourages sustainable farming practices because the educated consumer is willing to accept the natural surpluses and shortfalls that come with producing safe and healthy food.

We consider Field Day Family Farm to be part of this move toward greater communication and involvement between producer and consumer. We hope you will be empowered by your direct connection with the food you eat.

What is a Winter CSA?

Winter CSA will begin Tuesday December 6th and run for 11-12 weeks or until March 7th whichever comes first. This will be our third year with a winter CSA. It has its risks, certainly. One needs only to look at a few of the past several winters in order to imagine the challenges and, indeed, worst case scenarios. However, as with the past two winters, we have a plan to attend more to the fields and the work and the precautions than we have in previous winters and we again hope mightily and will work that way to make it happen. We think, within reason, that we have the experience to supply, protect, and store for the coldest part of the year.

What’s in the box? 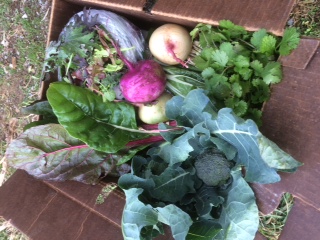 If there is a most common frequently asked question, it would likely be, “what will the boxes contain?” Very briefly, the boxes will contain root crops, cooking greens, salad greens, winter squash, and garlic. Specifically, the winter is significantly more difficult to predict than the regular season, but possible box contents (with varying degrees of probability) include: beets, broccoli, cauliflower, collards, salad greens, kale, kohlrabi, lettuce, garlic, green onions, parsnips, potatoes, pumpkins, radishes, rutabagas, spinach, sweet potatoes, winter squash, swiss chard, turnips, and cilantro. There will also be black beans and, i hope, black eyed peas, and as with last year, some value added farm products. This winter those value-added products will be from the new grasshoppers! In general, it is important to remember that, because of a combination of crop tenderness, crop volumes and degree of difficulty, some crops are more likely and will appear more frequently and some are less likely and will appear less frequently, very much like the regular season.

We assume we will have to cancel for inclement weather at some point and want to have the option of more time to fulfill our commitment, if possible. If it happens that the winter is especially severe, we still hope to fill at least eleven boxes by March 7th. Our expectation is that we will fill 12 boxes. The price is based on a 12 week season. We will go weekly with 4-6 items and will push the season into March only as weather requires. Who knows what Mother Nature has in store?!

For this third year and for everyone willing to take a modest risk with us, the price will be $32.50 per box or $390 for the winter. We are formalizing a returning members discount as well, so that, as of now, folks returning from last winter can get their shares for $30.00 per box or $360 for the winter. Boxes will contain 4-6 items instead of 6-7 which is the norm for the regular season. Volumes of each item will be larger than during the regular season, especially as the number of items is at the lower end.

Pick up times and locations:

We are intending to have the same or similar pick up times and locations except that there will be no Friday farm pick up option. See locations here.

Those interested in our Winter CSA can fill out our committment form here.

Ivor is the owner and farmer of Field Day Family Farm, co-owner of Harvest Restaurant and founding board member of the Food Literacy Project. Field Day Family Farm produces vegetables, chickens, and sometimes turkeys, sometimes hogs on 10 acres of land, has a CSA of 65 families, does farmers markets, and regularly employs more than half a dozen people on the farm.