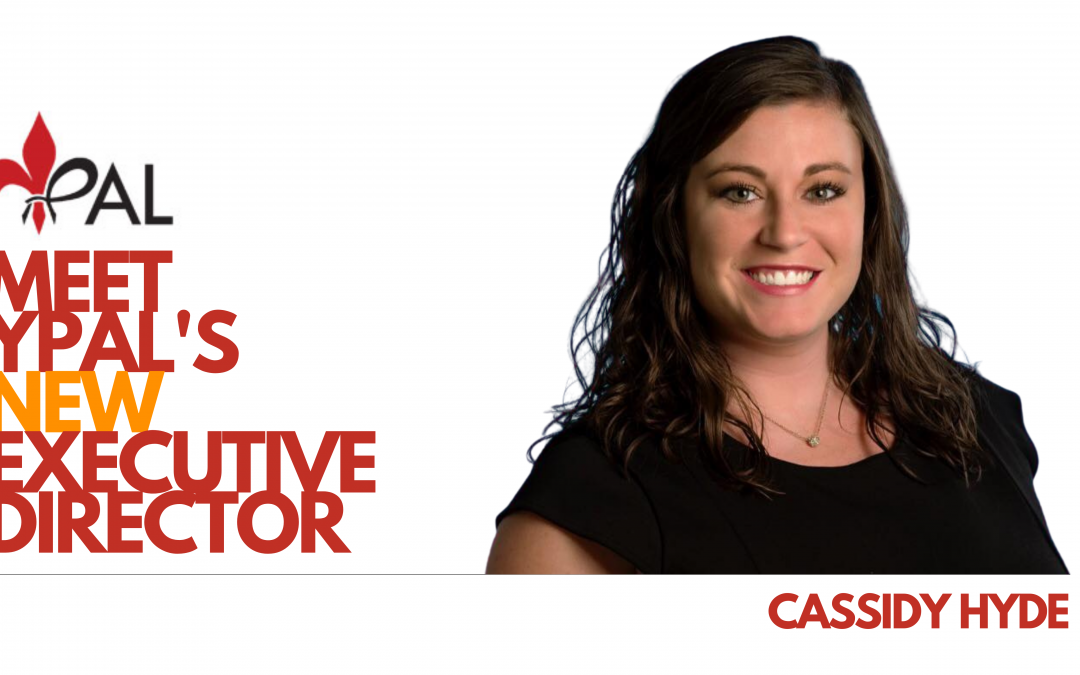 YPAL is pleased to announce a new Executive Director, Cassidy Hyde, who will take the organization’s reins in a full-time capacity on May 3, 2021.

The Leadership transition comes on the heels of former Executive Director, Ann Marie Maldini, taking a position with YPAL Sponsor, PNC Bank, after 7 years at the helm. She will serve as a Client and Community Relations Specialist. We are thrilled about her new role and wish her the best!

Incoming Executive Director, Cassidy, has been involved with YPAL since 2016 formerly serving on the YPAL Board of Directors as the President-Elect, VP of Programming, Director of Recruitment, and as Ambassador. She is also a graduate of the organization’s Emerging Leaders Program and Leadership Louisville Center’s Ignite Louisville program.

“Cassidy is perfectly placed to lead Louisville’s future leaders as YPAL’s new Executive Director,” said Rudy Ellis III, YPAL President. “Her character exemplifies YPAL’s values – someone with a passion for our mission, with connections in the community, and experience in program development, leadership, and fundraising. Cassidy’s tenacity makes her the ideal leader to rise to the challenge of strengthening the value proposition of YPAL and elevating the young professional community.”

Originally from Henderson, KY, Cassidy understands the importance of finding community in a new place. On her relocation to Louisville in 2016 as an Advancement Officer at Make-A-Wish Ohio, Kentucky & Indiana, she became involved with YPAL as a way to meet other young professionals. She holds a Bachelor Degree in Psychology from the University of Kentucky and actively volunteers as the Young Alumni President for the Greater Louisville Region, as an advisor for the University of Louisville Chi Omega Chapter, as the Marketing Chair for their alumnae group, a Brand Ambassador for the Leadership Louisville Center, and a Metro United Way Board Member.

“I value being an active learner and a servant leader. I am passionate about connecting others, bringing more voices to the table, and maximizing our impact to make meaningful change,” said

Cassidy. “I want our community to know their experiences are important and valued. My goal is for all young professionals to feel there’s a place for them here, retain our local talent and develop them to be the best leaders they can be.”

As the next Executive Director, Hyde is excited to build on the 22-year foundation of the organization and look to what’s next. She said, “Louisville has a lot of work to do over the next few years, the eyes of the nation have been on us and young professionals have a vitally important role as advocates and leaders in our city. I am excited to be a part of that work. The future is in our hands to build a safer, stronger, more inclusive community and YPAL’s role as a convener can be a catalyst for progress.”

Cassidy spends her spare time organizing spaces, goal-setting, exploring Louisville’s emerging restaurants and breweries, taking her border collie, Cooper, to Louisville’s many dog parks, and volunteering as a camp counselor at Kids Cancer Alliance and a Wish-Granting Volunteer at Make-A-Wish.

Learn more about Cassidy in our OFF THE CUFF interview below:

Why YPAL: I YPAL to make the next nervous new-Louisvillian feel like they belong, to surround myself with incredibly diverse people who have similar drive and vision. I YPAL to maximize our impact, to empower our collective voice and important role as Young Professionals in Louisville’s future. I YPAL to break down the barriers and show my friends and family across the state that Louisville is awesome!

Why Louisville: The passion! So many people are motivated by being a part of something bigger than themselves, I love being surrounded by people who inspire me to be better and do better daily. Growing up in Western Kentucky and then living in Lexington for a while, if you told me I’d end up in Louisville, let alone WORKING for somewhere Louisville specific – I would’ve laughed you out of the state. I moved here for work, and once I gave it a real shot, it started to feel like home. I love that I can be close to friends and family and really feel like I can have an impact in Louisville.

Career Ambition: Real-life or wishing? President of the United States, or a Cheetah Girl… I’ll let you guess which is which! 🙂

First Job: A good ole hostess at Applebee’s! I learned SO much about life, people, and customer service starting in the food-service industry at 16! PHEW – the world would be a better place if everyone did it at least once!

Recommend a book: The Storied Life of A.J. Fikry – I’m trying to do more reading for fun these days and I couldn’t put this one down!

The person you’d like to meet: I’m not so good with famous people.. Leslie Jordan’s videos have single-handedly gotten me through quarantine, so that would be fun!

What makes Louisville weird? This question! haha please tell me, my inbox is open! Everything I’ve thought ‘that’s weird’ has made me fall more in love with the city when I learn more about it; the neighborhoods (y’all just act like everyone knows what they mean?! haha), the art, the people, the big city/small-town feel, it’s all beautifully weird.

Favorite thing to do in Louisville: Newly vaccinated Cassidy doesn’t know how to answer this question quite yet! Right now, it’s taking my dog on a long walk/hike on a new park trail!

Favorite YPAL event: YPAL 101! This was my first event – I chickened out and didn’t show up the first time because I didn’t know anyone and was SO nervous to go in alone! But the second time was the charm and I haven’t looked back since! Now, I want to be that friendly face in the room that makes people feel comfortable, seen, and like they belong!

How did you find out about YPAL? When I found out I was moving here for work, I literally googled ‘where do young professionals live in Louisville?’ and YPAL was the first thing that popped up! So, I emailed Ann Marie, the Executive Director, and asked… ‘What’s with all these neighborhoods? What do they mean and where would you recommend a YP to live?’ … now I’m that ED – woah!