“OFF THE CUFF” with Tyler Moore 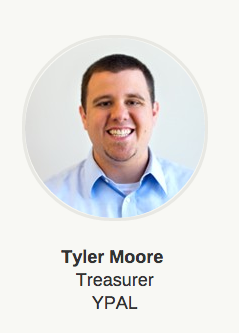 We asked our board members to answer a handful of pretty standard questions without thinking too hard about them. We found that YPAL’s board is made up of some interesting young professionals.

Tyler Moore was born and raised in Louisville. To answer your next question if you’re a local, he went to “school” at Christian Academy of Louisville and then attended Transylvania University.

Tyler has been a CPA for 4 years now and has been married for just over 1 year. He’s currently the treasurer of YPAL, and did we mention that he’s a huge UK sports fan? He bleeds blue.

Since being a UK fan doesn’t pay too well, what’s your day job?

Most 3rd graders don’t exactly wear their finance gear to career day. When you were a kid, what did you want to be when you grew up & how did that change?

When I was a kid, I wanted to be a professional basketball player. As I started to get older, I quickly realized the ability wasn’t quite there. I switched my aspirations in middle school to becoming an investment banker (so I have pretty much been a nerd for a while now).

To survive each busy season.

So, if that’s the goal, how do you stay sane during the busy seasons?

As I progress in my career, busy season just seems to get longer and longer. To stay sane, I try to find at least one fun thing to do every weekend. Whether it is a football/basketball game, concert, or some sort of craft beer fest, anything I can do to unwind a little bit is a welcomed break.

I’m sure tensions can be high during busy season. What’s the biggest mistake you’ve ever made at work?

The biggest mistake I have made at work is being too self-deprecating. While it is important to be able to recognize flaws so you can work to master areas you might be weak in, if you take it too far, your coworkers will start to actually believe what you are joking about.

On a positive note, what’s the best career advice you have ever received?

The best advice I have ever received is to never burn bridges at work. While Louisville continues to grow and get bigger, it is still a relatively small business world where there are only a few of degrees of separation between you and anyone else in the professional community. Mistakes you make can follow you around for the rest of your professional career, so be sure to never burn bridges.

Why have you stayed in Louisville?

I was born and raised in Louisville. To see how much the city has changed from when I was a kid until now has been amazing. I want to continue to be a part of the change and development of the city so future generations can say the same thing.

As a Louisville native, what are the biggest changes you’ve seen in the city in the last 10 years?

The biggest change I have seen in Louisville over the last ten years has to be the renewal of downtown. Previously, downtown was a place of business only. Now, NuLu has been built up and there always seems to be something going on downtown.

I wanted to get connected to other driven and motivated young professionals in our city. I wanted to become more engaged and make new friends across multiple industries (not just solely in the accounting/finance world).

Vince Vaughn. I love his humor and I am sure I would laugh the whole time. There are so many great Vince Vaughn movies, but my favorite would have to be Wedding Crashers. It is Vince at his best.

What’s your favorite thing to do in Louisville? Favorite place to eat?

Boating on the Ohio River is my favorite thing to do. And for restaurants, there are way too many to choose from. It is hard to go wrong with Impellizzeri’s or Cumberland Brews.

Ok, last question (DISCLAIMER: UofL fans can stop reading here). Since you’re a huge UK fan… What do you think is in store for UK basketball this year? Who’s your favorite player?

I think it is going to be a special year for the Cats. I don’t want to jinx it or anything, but let’s just say I already have my final four tickets to Indy and hotel room booked. My favorite player on the team this year is Alex Poythress. His athleticism is unreal and while he might never be the go-to player, I think he is going to have a great year.